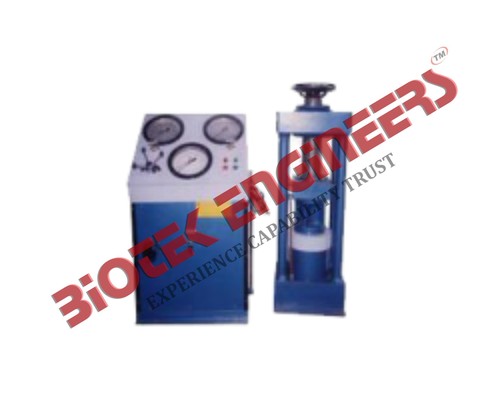 Loading Unit : The hydraulic jack of 2000 kN capacity is fixed to base. The upper platen has got a self aligning action and is attached to a screw which passes through the cross head and can be raised for lowered for initial clearance adjustment. The lower platen rests on the jack ram and ispositioned with the help of a centering pin. Loading is accomplished by the upward movement of the lower platen.

Pumping Unit : The motorized pumping unit which is housed in an elegant console is of double plunger type and is driven by 3 phase 440 volts 50 cycles electric motor. The pumping unit is separate unit connected to the jack by means of a steel connecting tube. A junction box is suitably fixed to connect the motor to the mains through a push button starter. The pumping unit is fitted with gauges. A maximum pointer is provided to facilitate taking of the reading after failure of the specimen. The pressure gauges are fixed on the pumping unit at an angle for easy readability.The machine is fitted with a hand wheel control which enables the rate of application of load to be varied. The machine is also equipped with facilities for hand pumping in case of power failure. The electric pumping unit is fixed with a micro-switch off the motor automatically as the load on the machine approaches the rated capacity. Relays are also incorporated in the pumping unit so that in the case of break-down of power supply, the motor will stop and would not-re-start unless starting switch is operated.
Other Capacity : 10 Tons, 25 Tons, 50 Tons, 100 Tons, 150 Tons, 200 Tons, 300 Tons 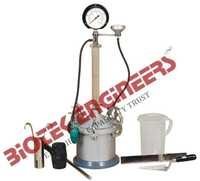 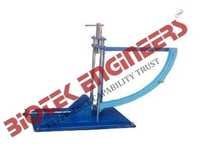 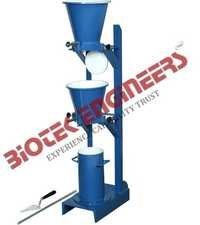 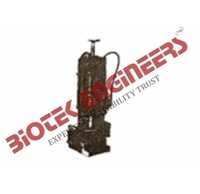 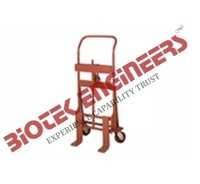